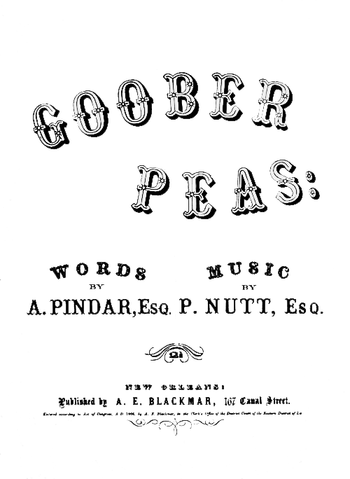 I had peanuts on the brain today. It started out with a few Goobers (the candy). Then I considered what an odd word “goober” is. I wikimedia’d “goober,” found this sheet music, wiki’d “goober peas,” and here we are.

Note that the real composer of this sheet music is A.E. Blackmarr, who credits A. Pindar and P. Nutt as the lyricist and composer, respectively. (A pindar is another word for peanut, along with ground nuts and ground peas.) Who says the South doesn’t have a sense of humor?

For those of you not in the know, goober peas are more than just peanuts. They’re boiled peanuts, which a lot of Southerners lived on at the end of the Civil War, after they lost their farms and were cut off from the rail lines.

I guess boiled peanuts are worth singing about when you’re hungry, but I never cared much for them myself — possibly the only peanut product that doesn’t attract me.

At any rate, this folk tune has been sung by people like Burl Ives, Tennessee Ernie Ford, and The Kingston Trio. In recent years, it was covered regularly in live performances by Elton John, although it’s never appeared on one of his albums.

Goober peas have been written about far and wide. I really like this story by the Smithsonian Magazine: “The Legumes of War: How Peanuts Fed the Confederacy.”

Verse 2
When a horse-man passes, the soldiers have a rule
To cry out their loudest, “Mister, here’s your mule!”
But another custom, enchanting-er than these
Is wearing out your grinders, eating goober peas.
Chorus

Verse 3
Just before the battle, the General hears a row
He says “The Yanks are coming, I hear their rifles now.”
He turns around in wonder, and what d’ya think he sees?
The Georgia Militia, eating goober peas. (Note: In some versions, “The Tennessee Militia” is sung instead.
Chorus

Verse 4
I think my song has lasted almost long enough.
The subject’s interesting, but the rhymes are mighty tough.
I wish the war was over, so free from rags and fleas
We’d kiss our wives and sweethearts, and gobble goober peas.
Chorus

by susan time to read: 2 min
Food That’s just not going to happen
Food The 12 little squash and how they grew
1